DID YOU KNOW:
Prior to 1984, most police could not legally make a warrantless arrest unless a misdemeanor occurred in the officer's presence, or the officer had probable cause to believe that a felony had taken place. Since most domestic violence cases involve simple assault and battery—a misdemeanor—the police could not make an arrest at the scene. Advising the husband or boyfriend to "take a walk around the block" was often the extent of police intervention.

DID YOU KNOW:
All states made "wife beating" illegal by 1920. However, only since the 1970s has the criminal justice system begun to treat domestic violence as a serious crime, not as a private family matter. Domestic violence is any physical, sexual, or psychological abuse that people use against a former or current intimate partner. It refers to a number of criminal behaviors: assault and battery; sexual assault; stalking; harassment; violation of a civil restraining order; homicide; and other offenses that occur in the course of a domestic violence incident, such as arson, robbery, malicious destruction of property, and endangering a minor. No person can validly consent to a breach of the peace or a battery that may result in serious injury or death. Furthermore, most states have abolished the marital rape exemption in toto; this exemption precluded husbands from being prosecuted for raping their wives. Thus, in general, there is no legal distinction between crimes committed against intimate partners and those committed against strangers.

We have come a long way, but still not far enough in preventing domestic abuse!
Posted by Unknown at 9:27 AM No comments:

What is Domestic Violence?

Domestic violence is the willful intimidation, physical assault, battery, sexual assault, and/or other abusive behavior as part of a systematic pattern of power and control perpetrated by one intimate partner against another. It includes physical violence, sexual violence, psychological violence, and emotional abuse. The frequency and severity of domestic violence can vary dramatically; however, the one constant component of domestic violence is one partner’s consistent efforts to maintain power and control over the other.
Domestic violence is an epidemic affecting individuals in every community, regardless of age, economic status, sexual orientation, gender, race, religion, or nationality. It is often accompanied by emotionally abusive and controlling behavior that is only a fraction of a systematic pattern of dominance and control. Domestic violence can result in physical injury, psychological trauma, and in severe cases, even death. The devastating physical, emotional, and psychological consequences of domestic violence can cross generations and last a lifetime.
It is not always easy to determine in the early stages of a relationship if one person will become abusive. Domestic violence intensifies over time. Abusers may often seem wonderful and perfect initially, but gradually become more aggressive and controlling as the relationship continues. Abuse may begin with behaviors that may easily be dismissed or downplayed such as name-calling, threats, possessiveness, or distrust. Abusers may apologize profusely for their actions or try to convince the person they are abusing that they do these things out of love or care. However, violence and control always intensifies over time with an abuser, despite the apologies. What may start out as something that was first believed to be harmless  escalates into extreme control and abuse.
Posted by Unknown at 8:10 AM No comments:

Something has to be done to STOP domestic violence!
Posted by Unknown at 7:48 AM No comments: 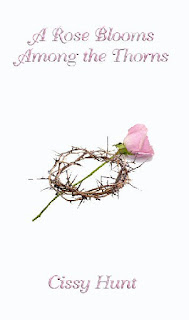 Since this is my first time to blog I thought I would blog about my book that is coming out soon. It is titled A Rose Blooms Among the Thorns. It is the story of a woman's journey from domestic abuse through healing to forgiveness.
Posted by Unknown at 1:41 PM 1 comment: